Source code available! Those who want some basic samples of new features can take my solution from GitHub repository gpeipman/CSharp7. This is (almost) the same solution I’m using for presentations.

What is protected private?

Let’s start with comparing previous protected access modifiers and see what level of access to class member they allow:

For class library developers there are was no way how to make class members inheritable only to classes in same assembly and same time restrict internal access. To support this scenario C# 7.2 introduces protected private access modifier:

Let’s get now to some examples illustrating protected internal and protected private.

What was private internal allowing too much was access to member by classes in same assembly. Let’s define the following dummy class.

Also let’s define another dummy demo class that uses the one we just defined. 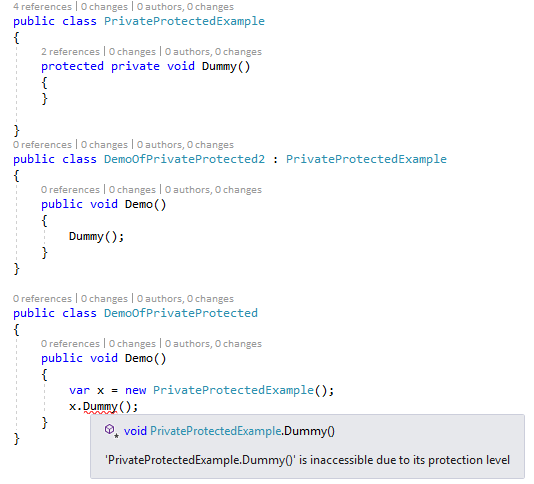 Before building and getting errors we already see in Visual Studio IDE that we can’t access protected private from another class without extending the class where it is defined.

protected private access modifier is small language feature that mostly affects those who are working on widely used class libraries or class libraries used by other teams. It gives more freedom on library design and express better author intensions with class usage also when it is about internals of class library.

Using TPL and PLINQ to raise performance of feed aggregator